…and rosemary is for remembrance 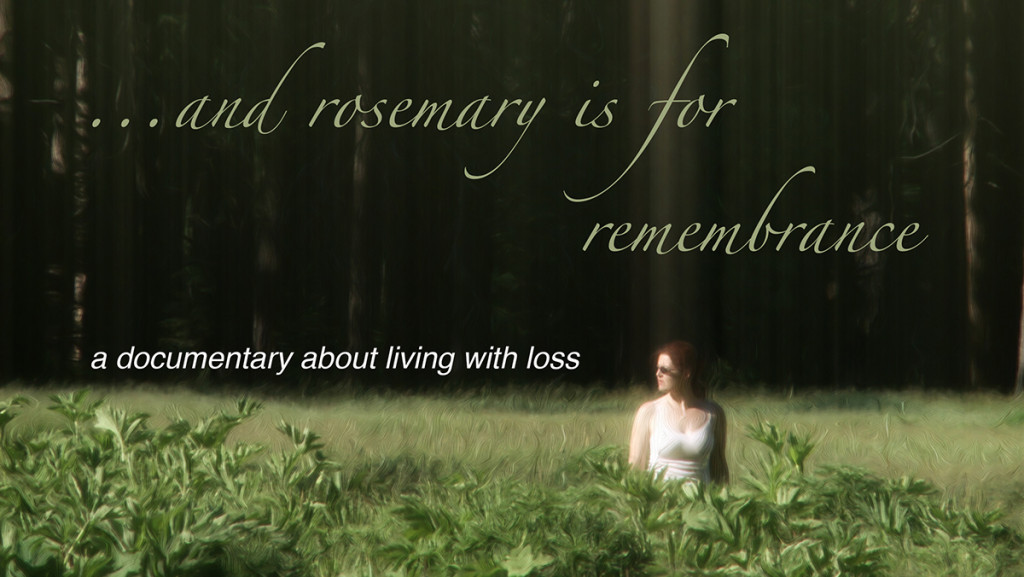 Why a documentary about death, dying and loss?

This film started out as a personal “remembrance” project for our friend Shirley. But as we got further into making the film we realized this was a story that needed to be shared.

Everyone has to deal with death at some point in his or her life.
So we decided to make a short documentary in order to bring awareness about the importance of dealing with loss. Shirley’s story is our inspiration for making this film and it’s too compelling to ignore.

It’s a conversation that everyone needs to have with their loved ones because death IS a part of life.

We all have to be prepared. Because it WILL happen.
Preparation includes everything from funeral services, getting legal and medical directives and what personal rituals you and your family want to create to keep the memory of your loved one alive.

Not only preparation but dealing with loss.

This documentary will help you to be more prepared or to get a conversation started with your family and friends in a beautiful way.

What is …and rosemary is for remembrance about?

Shirley never imagined that she would receive a phone call saying that her husband, Russ, had been in a motorcycle accident and was on life support. She never really thought that she would have to deal with making decisions about the end of his life and especially so soon.

A year later, her best friend, Liz, joins her on a trip to Yosemite to support her husband’s final burial request. Her best friend Liz falls on the trail incurring a minor injury and dies three weeks later.

All of these losses were completely unexpected.

This is a story of one woman’s journey coping with the death of her loved ones and sharing her story so that others can find ways to cope.

Jeff Foster has been producing and providing training for traditional and digital images, photography, illustration, motion graphics and special effects for DV and Film for over 20 years. Some of his clients include: Tribune Broadcasting, Nestlé, Spike TV, Discovery/TLC, Deluxe Digital, Universal Studios, Lions Gate Films and Disney. In addition to the many post-production projects he does for the feature film industry, he also operates a media production company, Sound Visions Media that provides quality HD video production and animation. The company has branded the concept of their award-winning “Documercial” as a method of storytelling in a documentary style approach to deliver a marketing message for their clients. Foster is a published author of several computer technology, animation and video production VFX books. He has been an Adobe Certified Expert and has served as an instructor and featured speaker at conferences such as Photoshop World, Macworld, Adobe MAX and the NAB (National Association of Broadcasters) Post-Production Conferences.

Ellen Johnson is the co-founder of Sound Visions Media where she produces and directs videos, commercials, and documercials. An entrepreneurial spirit, Ellen created her own record label, educational division, media group, publishing company and a non-profit organization. Her experience as a professional actor has given her the opportunity to understand how to get results from talent and interviews behind the camera. Ellen has worked as a publicist and promoter on many projects gaining visibility for artists, authors, businesses and non-profit organizations. With a Masters degree and professional experience in music, Ellen is a valuable addition as a music supervisor on film projects.

Jason Martineau is an award-winning composer, pianist, arranger, and instructor, and has been active in the San Francisco Bay Area since 1995.  He has composed numerous works for orchestra, chamber ensembles, solo piano, and chorus, as well as a full-length musical, and over 200 songs, both instrumental and vocal.  He has recorded more than ten CDs in various genres, and has also been featured on numerous other artists’ recordings as pianist, music director, vocalist, and producer.  He provides arrangements, original compositions, soundtracks, sound design, accompaniment, private instruction, and musical direction for a diverse and eclectic client base.  He has authored a book on music theory released October 2008 entitled “The Elements of Music,” published by Wooden Books and Bloomsbury Publishing.  His scores have been featured in documentaries broadcast on PBS stations around the US since 1998.  In 2011 he joined the faculty at the Academy of Art University, teaching music notation, theory, film scoring, harmony, and counterpoint.  He has also been a guest lecturer at CIIS in San Francisco, and was adjunct faculty at the San Francisco Conservatory of Music for the 2014-15 academic year.

Shirley joins us as an executive producer and is the inspiration for this documentary and it is through her courage and passion to help others that we are able to share this with the world.